This weekend the boyfriend and some friends went to the Irvine flea market. I have never been to this one, and it wasn't half bad. I hate the Rose Bowl. I used to like it, but with $20 to get in, and too many rows to walk in the sun, I quickly get over it. I like Veterans. Four dollars gets you in the door and there are many churro carts, a flea market must. I picked up a few things in  Irvine, one of them being this framed movie poster for my pad. 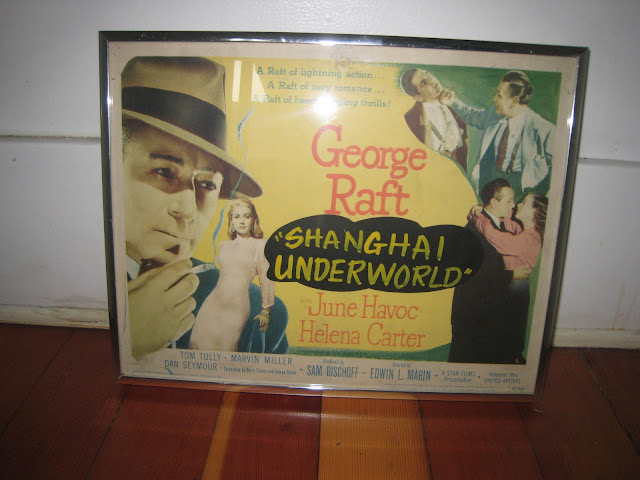 When I got home, I imdb-ed it to get the lowdown. Strangely, George nor June nor Helena were ever in a film called "Shanghai Underworld". They were, however, in a film called "Intrigue". In fact, there is no Googled record of any movie titled "Shanghai Underworld". I noticed at the market that the title seemed to be hand painted. So now I own a mystery poster. It is originally copy written in 1947, so either this is some mock up that is worth tons of money, or someone watched the film and decided they didn't like the original title and wanted to change their poster to something more appropriate. Either way, I added "Intrigue" to my queue and hung my new find on the wall.
Posted by Emily at 11:00 AM

Where is the Irvine Flea Market - at IVC??? I've never heard of it.