A week ago in the middle of the September summer we woke up to a crazy rain storm, and get this, hail. Readers on the East coast might be thinking, "Yeah, so what?" But here in little ol' Southern California, hail falling from the sky happens almost never and seeing it amazes me. I ran out on the porch in my pajamas and into the hail to pick up the gumball sized hail like a little kid and looked up to see several of my neighbors doing the same.
Aaaanyways, what a perfect time to throw on "The Rainmaker" with Burt Lancaster and Kat Hepburn. 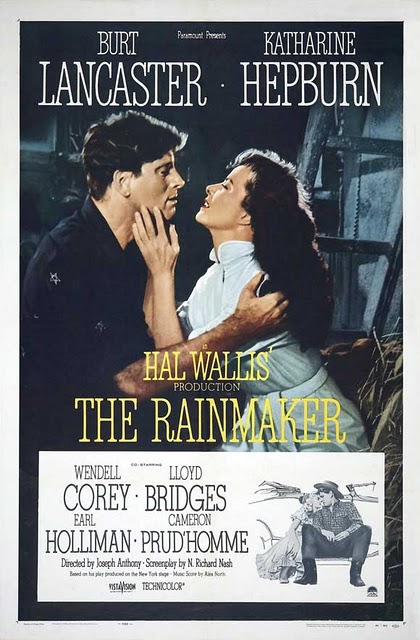 I must say first off, this film is not like other Kat films. In fact, although entertaining, it is really strange and sort of stupid. But someone liked it because she was nominated for an Oscar for her role. Katharine has two brothers. One is logical, played by Lloyd Bridges, and the other is an idiot, played by Earl Holliman. Father and the boys are waiting for Kat to arrive home from matchmaking trip to her cousins. Yeah, that's right, her family was trying to set her up with her cousin.
Strange factor #1. 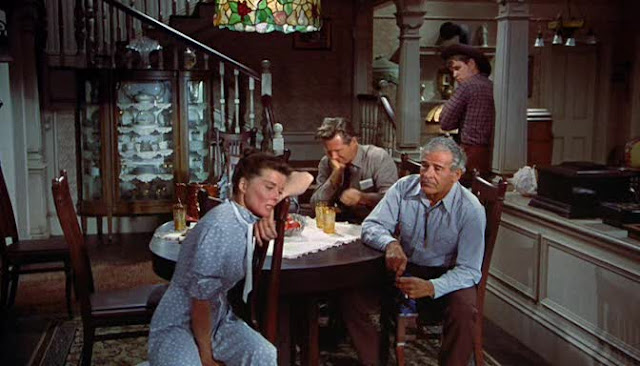 Katharine speaks her mind and none of her cousins wanted to marry her so she is back to making breakfast for the men and complaining because she is too "plain". Father and the boys decided to try to set her up with the last single man in town the divorced sheriff.
On top of that, the town is in a major drought and father's farm is in jeopardy. In walks Burt Lancaster, aka Bill Starbuck, the con man "rainmaker". He literally walks in, through the door one night of their home. Strange factor #2. 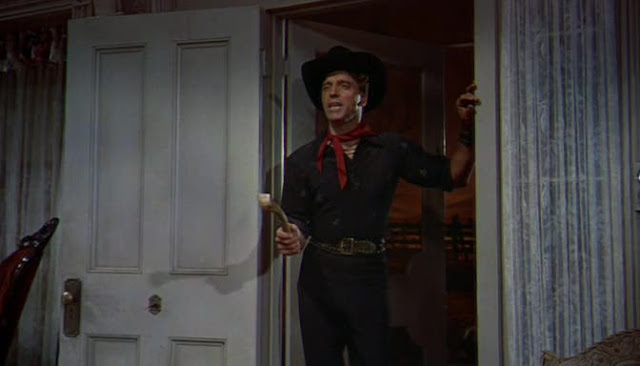 Mr. Starbuck offers them a really great deal. Pay him $100 upfront and by tomorrow he will make it rain, any kind of rain you want! Kat and older brother see right through him and thinks he is a scammer. Father is skeptical and idiot brother wants to know where to sign. Father finally gives in (talk about desperate) and the deal is made. First thing, make idiot brother bang on a drum at night to get the clouds to start making that rain. 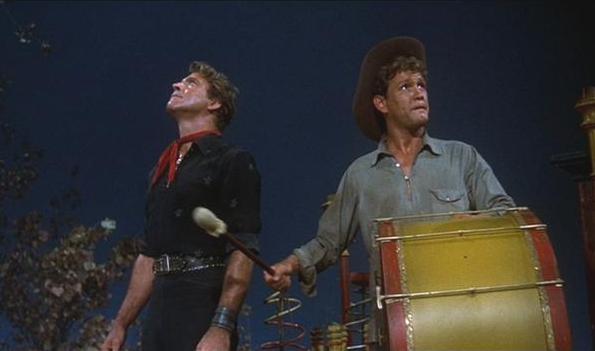 Next father is too draw an arrow on the ground with paint. While this is happening, Starbuck and Kat have it out when she calls him out on being phony. 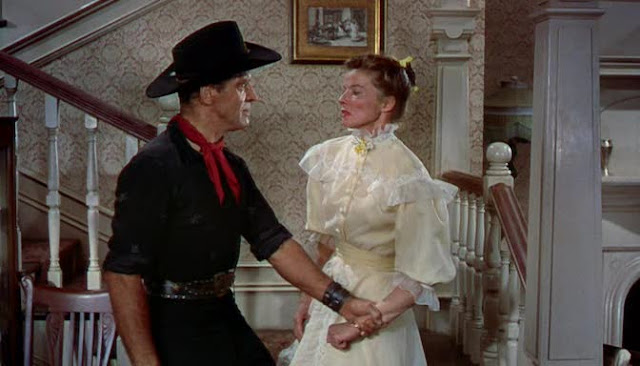 He calls her plain and says she isn't a woman. She storms (pun intended) upstairs. Half this film is her family bitching at each other and disagreeing about Kat's looks. 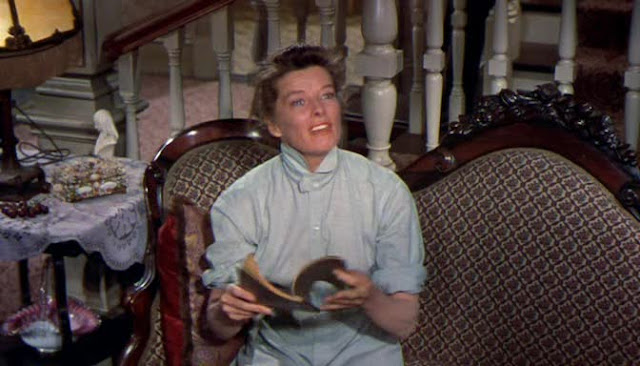 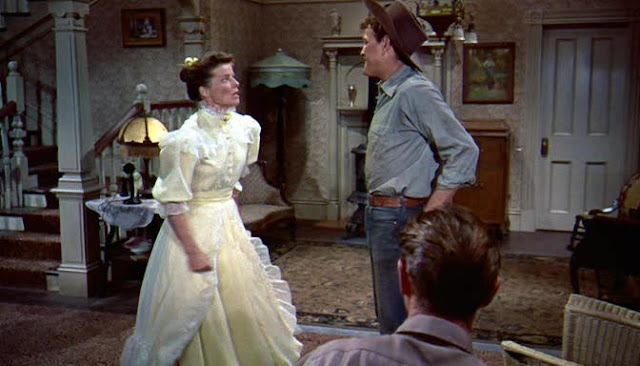 Sheriff comes over and him and Kat canoodle a bit but she scares him off with her "smart talk". She heads to the barn to cry and Starbuck chases after her. He takes her hair down and they suck some face. Strange factor #3.
After this, they are in love and logical brother is mad that father let them be alone. Starbuck can't stay long though because he is wanted for scamming the last town over and heads out. 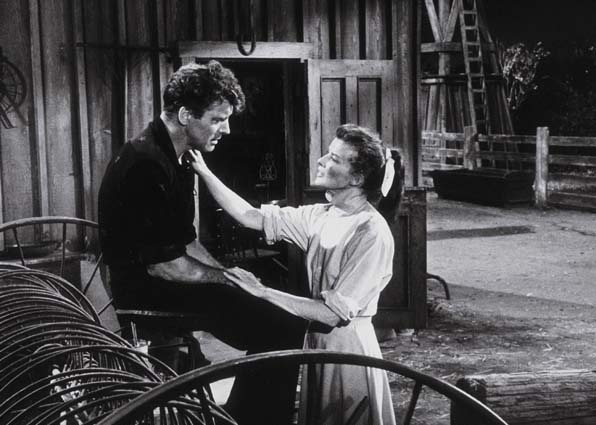 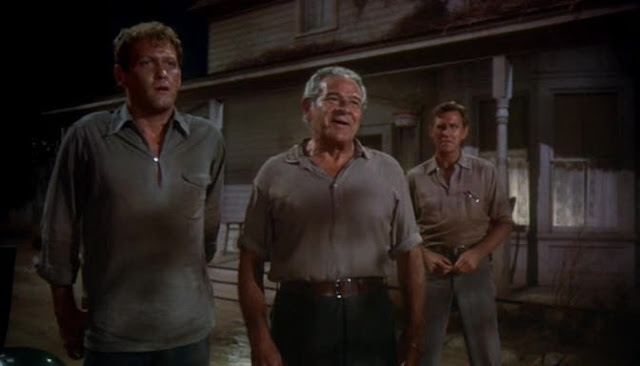 But what about the rain? What about fathers $100? What about Kat and Starbuck's 10 minute romance? So many questions! The ending comes and you will have to watch this film on your own to find out. 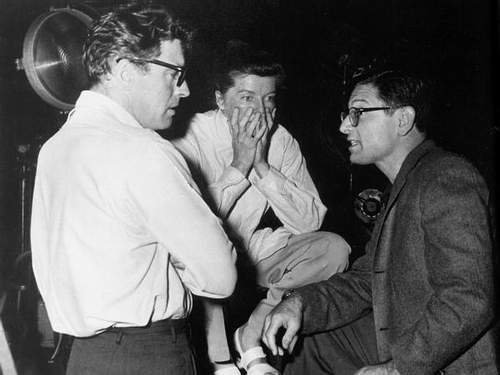 Katharine is thinking, "Is this film even worth it?"
Bill Holden was supposed to play the lead, but Burt got the part when Holden had a conflict. Bing Crosby also wanted the role, but didn't get it, probably a good thing.
Posted by Emily at 6:30 AM

I've never seen this one and now I'm not sure that I ever will... Thanks for saving me a couple of hours!!!

Geez, what an incredibly stupid review!

I'm so glad you enjoyed it! Come back again soon!